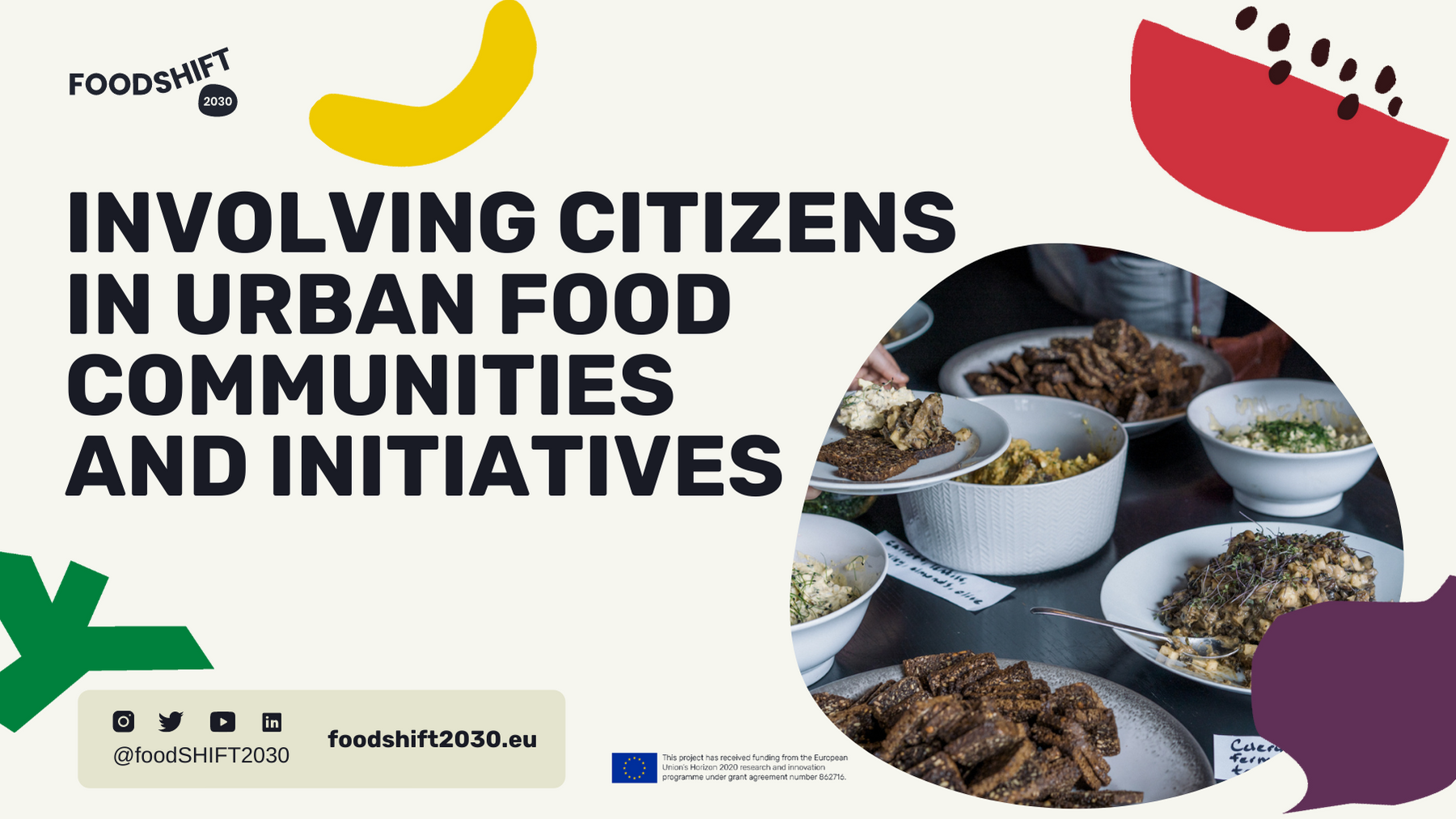 The FoodSHIFT 2030 project brings together urban communities committed to change in the way their food system operates.

A consultation process between cities has identified common themes for peer learning.

Involving citizens and people in urban food communities and initiatives is the theme of the first of several webinars.

There are two important dimensions to the places in which the communities in question participate. The first is the food local community. This community is a ‘community of interest’, i.e. a group of different people, who share a common interest for the food policy of the city, and related activities. But beyond a community of interest that offers a framework for collective reflection, community engagement can be an active participation in “Citizen driven innovation” which are grass-root initiatives, that are new (in an incremental or radical way) and initiated by city-region inhabitants.

The objectives of the webinar were the following:

The exchange of experiences between the six cities shows very different starting points, which can be grouped into three types of situations:

Because of their different configurations, the human and financial resources are very different, and the “good practices” that emerge from these exchanges are sometimes quite specific.

Trajectories for initiating the participatory process with the inhabitants

The initiatives each follow their own particular trajectory, which corresponds to their values, the operating culture and skills of the initiator and the human, technical and financial resources available to them.

Participants to the discussion platforms being regular in attending events was identified as an important factor in initiating a real dynamic of collective participation. For this, access to public funding is an important key to sustaining the organisation of the dialogue events.

Another dimension is the communication around the events, relayed by social networks, but also by the local press or other networks (for example, the city’s food council in Berlin). The moments of exchange between the participants, the conviviality around the meetings and the quality of the meeting place play an important role in the regularity of participants’ participation and the motivation to get involved, almost always on a voluntary basis.

Mobilising citizens and city dwellers is complicated. But mobilising farmers is often an even more difficult challenge.

Other issues that often came up during the webinar were among the followings:

This an incentive given by the Municipality, in order to make local food strategy more citizen-driven. Municipality make a budget available, and its use is decided upon citizens’ voting.

Farmers’ motivation is weak in many cases, and for many reasons. One being maybe linked to the education at farmers’ schools. Here, we could try to make them more aware about opportunities to enroll in citizens’ led initiatives.

There is an option for the municipalities to buy land, and contract a farmer to produce according to specific requirements. This could solve the issue of not finding any farmer willing to join any citizens’ led initiative.

Recruiting or contracting farmers is very demanding, there should be more experience sharing to perform it.

Terre de Liens in France has a good model to make land accessible to innovative farmers.

There is a need to find ways to long-term finance the initiatives, and not depend only on project’s funding.

This is an important challenge, and can be solved case by case, for ex. Turning urban agriculture into Community Supported Agriculture, or developing trainings for the citizens.

Think what can move a “citizen letter” addressed to the Maire

Some projects led by citizens can start from a citizen letter written to the Maire, like a child asking for the “Parliament of Kids” in Oostende.

Argue about your impact with evidences

Transfer benefits into “numbers” to visualize them, show social return on investment. This may help in raising long term public funding.

Link with other Cities

After the first year of scaling at the Barcelona level, a joint work could be initiated with Baumhaus in Berlin, to introduce the Food Tech 3.0 innovations in their community

Testing the innovations experimented in the Fab Lab in Barcelona (smart citizen kit) would be then presented to Baumhaus initiative in Berlin, to promote the concept of alternative food low tech, i.e. tech that is open, accessible, just and citizen-driven.