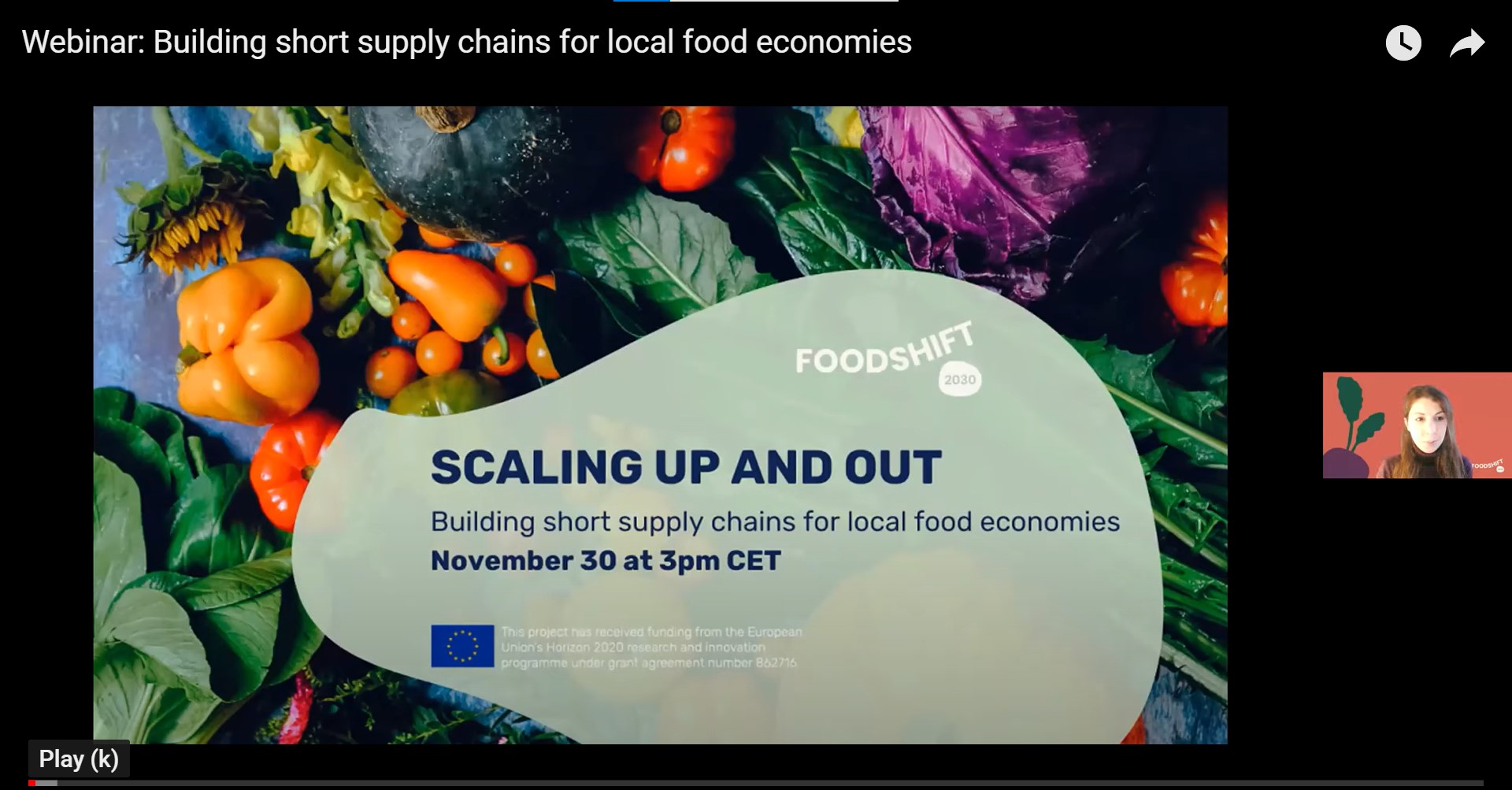 During our latest webinar on short supply chains (scroll down for video!), our chair Silvia Schmidt, from IFOAM Organics Europe, opened the session outlining how the fragility of our food system has been made increasingly visible. The industrial food system is reliant on distribution methods that are tenuous and easily susceptible to global shocks, whether from climate change or the ongoing coronavirus pandemic. As Silvia noted, it is a timely moment to focus on establishing more direct and equitable connections between local suppliers and consumers given both the growing demand from people for more planet-friendly diets, as well as the recent launch of the European Commissions’ Farm to Fork strategy.

“Knowing that short supply chains are on the political agenda, and are mentioned in the Farm to Fork strategy, is definitely a step forward.” Silvia Schmidt

Raluca Barbu, from High-Clere Consulting in Brasov, Romania, highlighted her team’s work on shorter supply chain development as a part of their role within FoodSHIFT 2030 as a Food Accelerator Lab (FAL). Over 90% of Romanian farms are less than 5 hectares and have minimal access to capital, with few formal networks for cooperation and a reliance on informal networks for selling. The FAL is therefore working to support predominantly traditional, small-scale local producers to establish a more ambitious regional food system, thereby boosting the food economy and reviving rural communities.

For example, with the support of the municipality a new public market was trialled last summer in a former market space that had gone unused for years. More and more families visited each week, who enjoyed getting to meet the producers and learn more about the products on sale. A chain of local gastronomic points was also set up to tap into the area’s tourism industry and attract visitors directly to the farms for tasting and purchasing. Helping farmers improve their business acumen, access better financial support and connect with new customers has been very well received. But Raluca noted that many challenges remain such as improving communication and building trust, which takes time. Even for very short supply chains, establishing what support is needed in the middle (e.g. storage space) is a critical step on the road to better business sustainability.

Tom Uhnak, from the Association of Local Food Initiatives (AMPI) in the Czech Republic, brought in the perspective of Community Support Agriculture (CSA) as a model for creating shorter and more equitable supply chains.

“I see it as paradigm-changing in terms of how consumers are sharing risk with the farmers in crop failure, for example. The CSA principles are based on mutual trust, ecology and food sovereignty. So we are trying to define and shape our own food and agriculture system through CSAs.”  Tom Uhnak

Czech CSAs first took off in 2008 and have since expanded to involve 30 farmers and 3,000 shareholders, many of whom are families. To help meet the growing demand and build more direct connections, AMPI has created an online map to track both existing CSAs as well as new farmers and consumer groups who would like to start a new one. Over the last year, and with the participation of farmers themselves, they have been developing a national CSA coalition to identify key elements of the models that should be preserved when expanding.

As Tom explained, solidarity with farmers is one of the greatest strengths of this model, although can bring more risk to consumers who must weather any change to the harvest along with the farmers. There are also opportunities to set-up a pay-it-forward system within a CSA to lower the barrier for people to join who have a lower income, but without affecting the farmers’ pay.

However, while CSAs are beneficial for those involved, Tom pointed out that system level solutions are also needed to increase access to local food for a wider number of people, for example though changes to public procurement in schools, which AMPI is also working on. It also means that other models are needed for sourcing food from further away. For example, Tom’s CSA group has also developed a solidarity partnership with agroecological fruit growers in Greece who provide them with fruit and citrus that can’t be grown in the CR. While this supply chain isn’t necessarily short in terms of kilometres, as there is no intermediary and the relationship is equitable, Tom says “it feels local to me.” As all the speakers noted, shorter supply chain models must also balance the demands of not just financial viability but also the reality of consumer demands.

Joining us from the Open Food Network, Nick Weir then led a tour of their open-source, not-for-profit online platform for ethical food producers. It is active in 20 countries, with another 15 in the process of deploying it. The OFN allows producers to set their own prices as well as band together with other local enterprises and community members to develop food hubs, which can be as geographically small or large as the group decides and act like a virtual farmers’ market. Many members are CSAs, but there are also farmers selling direct from their land as well as food hubs, which take many forms such as farmers’ markets offering an online option.

The OFN aims to take a behind-the-scenes approach on the platform, putting the farmers, food hub or other uses at the forefront of the pages instead. Being open-sourced is integral to their approach as it means the technology is owned by the people who are using it, with new tech updates released weekly that directly address user needs. As Nick mentioned, there are many platforms that offer similar e-commerce platforms, but they are proprietary and therefore owned and controlled by the people who set up the software in the first place. OFN is unique in offering the only global open-source platform for shorter supply chains in food, putting their values into practice at the very core of their operations.

As was expressed by all the speakers, the digital readiness of small-scale farmers and producers varies significantly from one person to the next, so the Open Food Network platform is designed to allow administrative responsibilities to sit more with a food hub coordinator than a farmer if needed. Similar to Raluca’s experience in Brasov, farmers often have limited capacity for marketing their produce or integrating new tech or financial systems. The OFN aims to make that expertise more readily accessible to food entrepreneurs, while maintaining high ethical principles as an enterprise themselves.

We were lucky to have a such lively discussion amongst the group and audience, who brought in questions about food poverty, digitalisation and public procurement as well. As Silvia said in the webinar’s conclusion,